Children of the Powwow: Changing The Way We See Native America 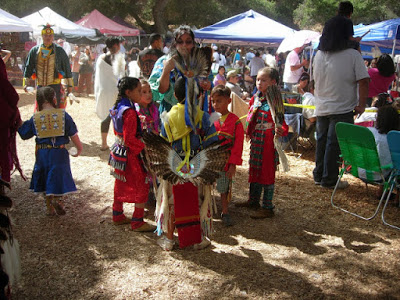 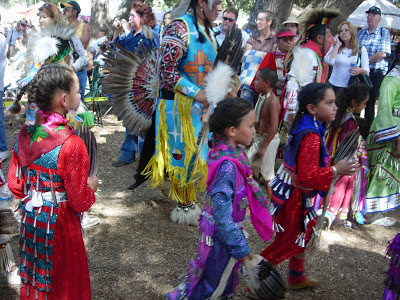 The kids in my creative writing class began asking me many questions about Indians. Some said they had few opportunities to meet and talk with American Indian people. Their quest for a deeper understanding, developed into an idea to take them to a Powwow, and lead them into a day of drumming, dance and regalia.

While we planned our journey, the children, teachers and parents asked thoughtful questions, allowing me the opportunity to share my perspectives on the importance of dismissing stereotypes. I helped them understand many of the old photographs we see in books are only pictures, and that even in the olden days many American Indians didn’t live the way they looked in the photos.

I explained that when American Indian people are compared to these old photographs and stereotypes outsiders often tell us we don’t look Native American. I wondered how we might counter this predominant notion and change the way Native Americans are viewed in popular culture.

My inspiration came from Project 562: Changing The Way We See Native America by Matika Wilbur, which creatively addresses and remedies historical inaccuracies, stereotypical representations, and the absence of modern-day Native American images and voices in mass media, and the national consciousness.

Attending our local community powwow as a group, would help the children counter stereotypes and increase their understanding of what it means to be Native American in America today, and place new authentic and accurate images in their minds.

By no means do I believe I am an expert regarding powwows, or have expert knowledge of Native American people. Learning is a lifelong pursuit. But I could offer a starting point, so the children could begin to learn more about Native peoples.

The day before we traveled to the powwow I sat down with the children and with their parents, and explained that powwow is a modern-day word. Before the First World War they were called gatherings. After the food was gathered and stored for the hard winter months and when the work was all done they gathered. After World War I these “gatherings” were held to honor those servicemen who came back.

Today a powwow is a reunion for many Native families, clans and tribes spread apart in different cities or reservations. There is the exchange of news, ideas, song, and dance, Native fashion, style and art, and it’s a time when Native people reflect on traditions.

I told the kids that while it was fine for us to laugh and tell jokes all morning, but when the powwow began we needed to be quiet and listen to the arena director and the master of ceremony. I explained we should be careful to sit a safe distance away from Eagle feathers and dance regalia, and that we could not touch anything belonging to the dancers.

First there was the Ground Blessing. Then the flag bearers came in with the American flag, the state flag and an Eagle Staff. The Grand Entry began, the dancers representing many different tribes. After all the dancers were in the arena a Flag Song was sung, then a prayer was offered, followed by a Victory Song.

After the Victory Song ended, I asked the children if they could feel the heartbeat of the drum. The drum, I explained, was one of the oldest memories an American Indian has, it has always been with us, and is the single most important element of a powwow.

In the arena hundreds of people wearing soft moccasins were dancing. Men, and women carrying babies, boys and girls, and the elders who barely move, stayed close to the earth.

I explained how the dance arena or arbor is sacred and is respected, like the inside of a church and that many Native families traveled hundreds of miles to attend powwows across the continent to share the renewal of traditions. And how for us it brought a long heritage back into the framework of real life.

I told the kids how my Auntie always said each person had her or his own personal reason for dancing, drumming, singing and for being present at a powwow. She said the people gathered around the arena were not only watching—we were participating as we formed a circle around the drums, singers and dancers.

Throughout the day I ask the children to close their eyes and listen to the drums, and to imagine what it might have been like two hundreds of years ago.

Multiple times I took the children to meet my friends, so they could have an opportunity to see and talk with American Indian fathers holding sleeping babies, and American Indian mothers laughing, while braiding their children’s hair. I want them to see happy Indians laughing and joking with each other. Humor is an important American Indian cultural trait. We believe it is of key importance not only to laugh, but also be able to laugh at ourselves.
I wanted the kids to see American Indian children laughing, eating popcorn, being silly and playing the same games all children play. Then they had an opportunity to see those same children change into their dance regalia, have their hair braided, faces painted, become serious, quiet and focused, and prepare to dance.

I wanted to provide stepping-stones for the children so they could begin to see American Indian people have respect for our traditional ways, and that we are also real people too, who drive cars, and work as doctors and teachers. To show the children that American Indian mothers and fathers are also regular moms and dads, who cook dinner, help their children with their homework, play baseball, and go out for pizza.

Most of all I wanted the children to understand Native Americans are Native Americans, even when we are not dressed in beadwork and feathers. I told the kids we are here to honor the past and be proud of our future. I shared with them the stories my aunties have told me about how each person is a link to history, and when it comes to powwows some Native people chose to become drummers, others become dancers, but even those of us who are watching and listening, every person at the powwow is part of the circle.
Author's Note
If you have never attended a powwow or would like to learn more, click here to read my post published at Matador Network explaining a few helpful things you need to know.

This essay was first published at Speak Mom and was reprinted in the Huffington Post.
© 2009-2022 Terra Trevor. All rights reserved. Terra Trevor
Email ThisBlogThis!Share to TwitterShare to FacebookShare to Pinterest
Newer Post Older Post Home